Back in 1971, Dr. Seuss introduced us to a determined little environmentalist known as the Lorax. In the book that bears his name, the Lorax stands alone against the greedy Once-ler, who is hell-bent on chopping down all the precious truffula trees to make his dreaded thneeds.

The Once-ler: Look, Lorax, calm down. There’s no cause for alarm. I chopped just one tree, I’m doing no harm. This thing is most useful! This thing is a “thneed.” A thneed, a fine something-that-all-people-need! It’s a shirt. It’s a sock. It’s a glove! It’s a hat! But it has other uses, yes, far beyond that. You can use it for carpets, for pillows, for sheets, for curtains! Or covers for bicycle seats!

While a thriving thneed industry may have been part of a stimulus package for the Lorax’s forest, in the end it left a once lush and beautiful place barren. (Not cool, Once-ler.) It wasn’t long ago that a similar threat was facing some of New York’s green spaces—that is, until a champion of our own spoke up to save the day. All hail Bette Midler, the Divine Miss Lorax, and her New York Restoration Project!
The Divine Miss M Goes Green
Back in 1995, Midler saw that too many of New York’s parks and community gathering spaces were in a serious state of neglect. Some were an unusable mess. With the help of a few friends and a never-say-die attitude, Bette set about cleaning up the garbage from Fort Tryon and Fort Washington parks. The good deed had her hooked, and she founded the NYRP soon thereafter.

In 1999, then-Mayor Rudolph Giuliani announced plans to sell 114 community gardens to developers. Bette and her NYRP knew that the last thing that New York needed was fewer community gardens, so she set about partnering with other nonprofits and raised enough money to buy them. All 114. That’s the kind of scrappy, grassroots thinking coupled with huge, tangible results that has come to define the NYRP’s work.

Perhaps the most ambitious project they’ve spearheaded is MillionTreesNYC. As you may have guessed from the program’s name, the goal—carried out in coordination with the NYC Department of Parks & Recreation—is to plant and care for 1 million new trees across the five boroughs in 10 years. The initiative was launched in October of 2007, and by this October they will be halfway there. Not too shabby—and remember, she can sing, too!

All that “greening” is hard work, so what better way to relax than by donning a costume at NYRP’s annual Hulaween fundraising gala? The “hula” is in recognition of Bette’s Hawaiian background (she was born in Honolulu), and we all know where “ween” comes from. The dress code, as stated on the invitation, is “Costumes or Else.” This year, its 16th, the much-anticipated gala has a theme of Dia de los Muertos (the Mexican Day of the Dead) and will take place on October 28th at the Waldorf-Astoria. Each Hulaween seems to top the previous: Last year Senator John Kerry was honored and Paul Simon provided the entertainment, and this time around, Stevie Wonder will take the stage. Like last year, the no-holds-barred costume contest will be judged by fashion designer Michael Kors. No pressure.

When asked what the event means to her, Ms. Midler was at no loss for words. “Hulaween is our biggest fundraiser of the year, and I’m happy to say that after 16 years, New Yorkers look forward to it and start planning their costumes months in advance,” she kvelled. “It’s the one opportunity we have to throw a party that not only reflects the work we do, but is fun, full of surprises and totally different from every other event in the city. This year my friend Stevie Wonder is performing—need I say more? And of course, the money we raise is vital to keeping the programs of NYRP going strong, and we are grateful for the generous support we get from our friends.”

There you have it: proof, once again, that good people do great things in and for this city, and throw one heck of a party afterward. Be a part of it—head to nyrp.org and give what you can. Not only will you be doing something great for our city, but you’ll have earned the right to proclaim that you, too, speak for the trees. 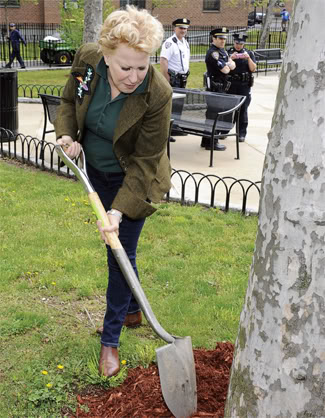