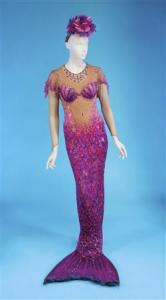 (Reuters) - Bette Midler's famous mermaid stage costume, the Valentino gown she wore to the 1992 Oscars and a collection of headdresses are all going up for auction in November, Julien's Auctions said on Tuesday.

The singer and actress also is selling several stage costumes designed by Bob Mackie and outfits she wore on album covers dating back to the 1970s.

Top items include a glittering pink-and-purple mermaid costume that Midler wore during her recent two-year residency "The Showgirl Must Go On" in Las Vegas, which is expected to sell for $1,000 to $1,500.

Midler, 65, who has sold more than 30 million records over a 40-year career, is donating a portion of the auction's proceeds to the nonprofit organization she created in 1995 to restore small parks and community gardens in New York City.