Own a piece of Bette Midler

Own a piece of Bette Midler

Legendary entertainer Bette Midler is auctioning off some of her most fabulous outfits in Los Angeles next month.
Over 300 items, including dozens of gowns and costumes, will be up on the auction block with proceeds going to the New York Restoration Project – started by the 65-year-old in 1995 to clean up public spaces and parks in New York City.
Julien’s Auctions in Beverly Hills will host the sale on November 12, but the public can preview Midler’s collection at the auction house beginning October 31.
Some of her most famous costumes are expected to fetch thousands of dollars each, while a few ensembles are estimated in the $500-$800 range.
Midler’s original wheelchair mermaid ensemble is one of the prized offerings at the auction, alongside a black-and-white Valentino number Midler wore to celebrate the designer at a 1992 event, and a pink feathered showgirl costume from her Vegas performances.
Other items include Bob Mackie stage costumes, vintage Emilio Pucci, album cover outfits, jewelry, art, sketches, props and gold records. 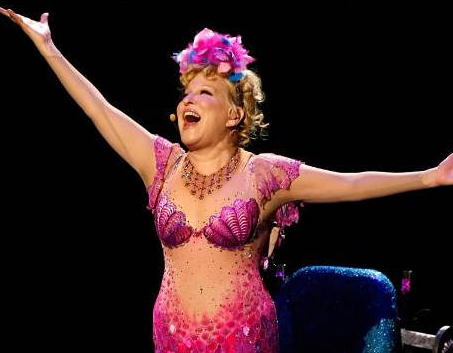