As BroadwayWorld previously reported, Image Entertainment, Inc. has acquired the home entertainment and digital rights to Bette Midler: THE SHOWGIRL MUST GO ON, the legendary star's triumphant return to Las Vegas. The $10 million extravaganza played over 100 performances in a two-year run at the famed Colosseum at Caesars Palace. According to Amazon.com, the DVD will be released on October 4, 2011 and will be sold for $15.99. Amazon is now taking pre-orders.

Taped before a packed house at The Colosseum at Caesars Palace in Las Vegas, the 70-minute cavalcade features some of Ms. Midler's colorful and classic stage characters. Joining her is an entourage of talented performers, including the staggering Harlettes, twenty dazzling dancers she calls The Caesar Salad Girls and a 13-piece band. Ms. Midler's superstar power shines in renditions of her immortal songs including "The Rose," "Boogie Woogie Bugle Boy," "From a Distance," "Hello in There" and "Wind Beneath My Wings." 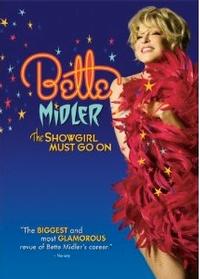