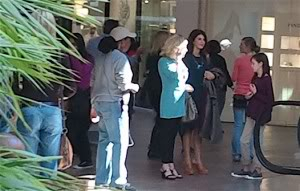 “Flight,” starring Denzel Washington and John Goodman, has been filming in an apartment complex off Glenridge Drive in Sandy Springs and also at St. Joseph’s Hospital on “Pill Hill” this week. Goodman and Washington worked together before, on the supernatural thriller “Fallen.” This project, about a heroic pilot with a mysterious past, sounds intriguing too.

This family friendly movie, due out in time for Thanksgiving 2012, filmed in Piedmont Park for a few days as well but has done a good bit of shooting OTP, including at Perimeter Mall the other day, where this photo was taken. The movie folks had a strict no-pictures policy which our intrepid spy apparently managed to circumvent by hiding behind a plant. Cloak and dagger, love it!

“Neighborhood Watch,” starring Vince Vaughn, Ben Stiller and Jonah Hill, is back at Campbell High School in Smyrna tonight filming a huge outdoor scene at the football stadium. Previously they filmed on the Marietta Square. A Disney project tentatively called “Until We Meet Again” also is headed for Marietta, and will be filming at the Strand Theatre.
*******************THE DIVINE BETTE MIDLER *******************
~ VISIT MY BETTE MIDLER-FANSITE ~
https://www.facebook.com/BetteMidlerFanpage

Yayy!! Sad we have to wait an entire year for this movie...

Lainy_PopVP wrote:Yayy!! Sad we have to wait an entire year for this movie...